Not everything is about profits and the bottom line for all companies. Recently, Yes Solar Solutions and Baker Renewable Energy teamed up with local nonprofit NC GreenPower to help get a wounded Veteran’s solar PV system back on track. 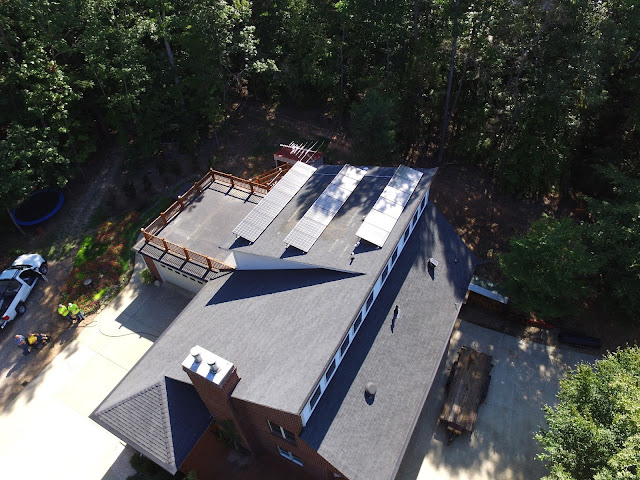 In 2005, Army Sergeant Jon Roberts was stationed in Iraq when he was hit head-on by an 18 wheeler on his way from the Baghdad airport to his base and sustained severe brain injuries. After several surgeries, months in a coma and more months recovering in a VA hospital, Jon returned with his parents, Steve and Heidi Roberts, to Waxhaw, North Carolina where their extended family lives. They started plans to build a handicapped accessible home on six acres of family land. Steve applied to Homes for Our Troops, a privately funded 501(c)(3) nonprofit organization that builds mortgage-free, specially adapted homes nationwide for severely injured Veterans to enable them to rebuild their lives. Jon was accepted and his new home was completed by Homes for Our Troops volunteers in the summer of 2008.

After the house was built, Steve felt that he needed to invest in renewable technology to stabilize their energy costs. He hired a company to install a 3.7 kilowatt solar photovoltaic (PV) array on the roof of the home to cut back on their use of traditional electricity. Unfortunately, the solar franchise experienced some difficulties during the installation, and the system was installed improperly and never fully completed. To improve his return on investment, Steve also signed up as an NC GreenPower generator, receiving a small incentive for every kilowatt-hour of green energy their solar PV system sent to the electric grid.

Sadly, the system didn’t produce as much energy as it should, and Steve’s investment struggled to perform properly. Earlier this summer, NC GreenPower’s Vice President, Vicky McCann, contacted Steve about possibly finding a qualified contractor to donate their services to fix the system. Vicky decided to reach out to a couple of NC GreenPower solar companies who are currently a part of the program’s Solar Schools pilot. “It has always bothered me that the system did not produce the way it was supposed to, likely because of a poor installation.”

Both Yes Solar Solutions and Baker Renewable Energy responded enthusiastically about being a part of this pro bono project and started work right away on correcting the solar PV installation, getting permits, interconnection requests and utility filings together on behalf of the Roberts family. The system was repaired by the team and is online now, producing more than 5,000 kilowatt hours of power annually, or about a third of what the average home in North Carolina uses over a year.

Stew Miller, Co-Founder and President of Yes Solar Solutions said, “The Roberts’ story is truly amazing.  This is great example of the NC solar industry working together for the benefit of a military family in need.” Jason Epstein, Executive Vice President of Baker Renewable Energy echoed Stew’s thoughts, “We wish it was done right the first time, but we were absolutely thrilled to be a part of the solutions team.”

NC GreenPower will be following the solar PV system’s performance, comparing historical data to the next 12 months of energy production and sharing it with the team. The Roberts family had more good news this summer when Homes for Our Troops contacted them about another grant opportunity. The organization recently received funds to go back to homes they constructed and add a backup generator with a propane tank. Jon continues to improve in his recovery from his injuries and is able to communicate through the use of an iPad. He now also has the ability to drive an electric wheelchair and enjoys therapeutic horseback riding.

Now that his system is fixed, we expect that it will soon begin performing the way it should have been – thanks to this group – and Steve’s intent to reduce Jon’s energy costs will come to fruition... a small payback to a worthy Vet. 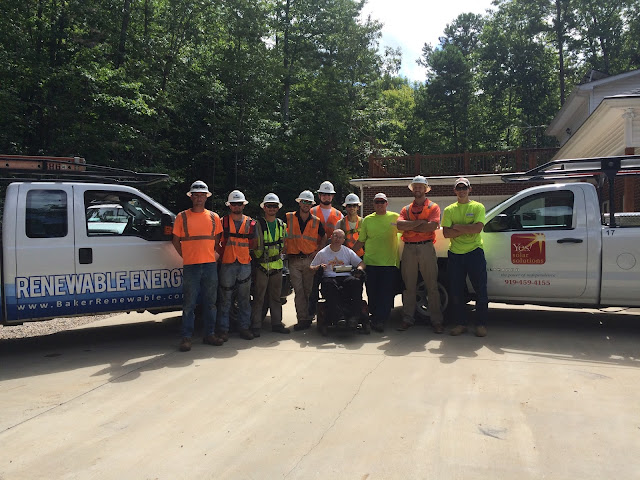 
With the mission of improving the quality of the environment in North Carolina, the nonprofit NC GreenPower was founded in 2003 by Advanced Energy as a statewide program. NC GreenPower helps to connect consumers with renewable energy and carbon offset providers to create positive environmental and economic impacts for our state. All projects supported by the program are located in North Carolina.

In 2015, NC GreenPower launched Solar Schools, a matching grant program to support solar PV installations at North Carolina K-12 schools. Recently, Duke Energy and NC GreenPower announced a new partnership – “Schools Going Solar.” Duke Energy will invest $300,000 to pay for 100% of the installation costs for rooftop or pole-mounted solar PV systems for up to 10 schools in the state. Contributions to NC GreenPower are tax-deductible. For more information, visit: www.ncgreenpower.org.
Posted by - Katie, NC GreenPower at 10:39 AM